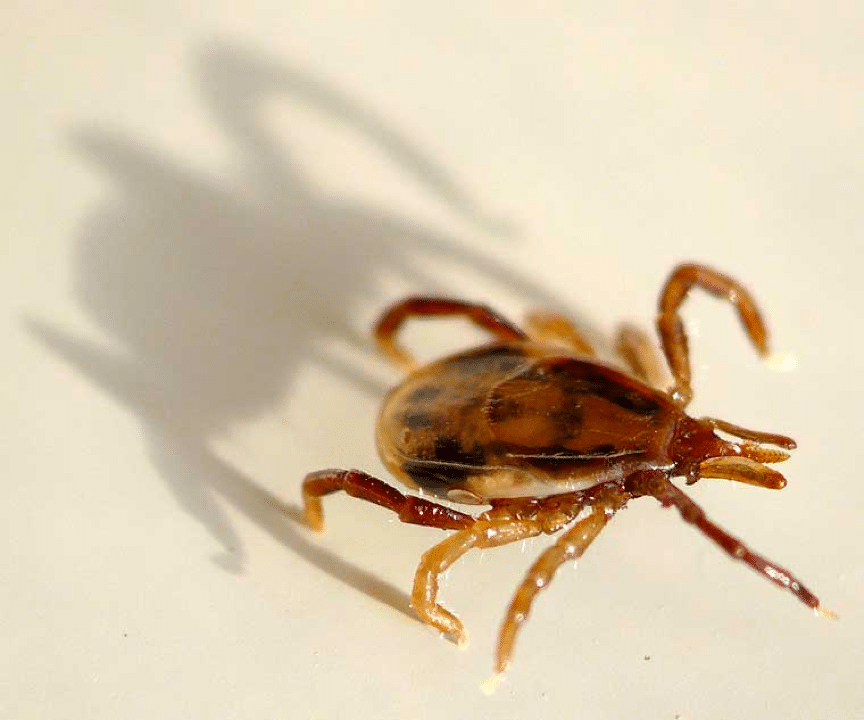 Ticks are arachnids (related to spiders and scorpions- adults ticks have 8 legs).  They are parasites, specifically “ectoparasites” which means they live on the skin of hosts.  Ticks must feed on the blood of animals to survive, grow and reproduce.

Ticks must get a blood feed to progress from larva to nymph; then nymph to adult. An adult female needs another blood meal before she can lay a clutch of eggs. Ticks are not fussy about what creatures provide the blood. They will feed from all mammals, birds and reptiles.

So a tick’s life could go something like this: 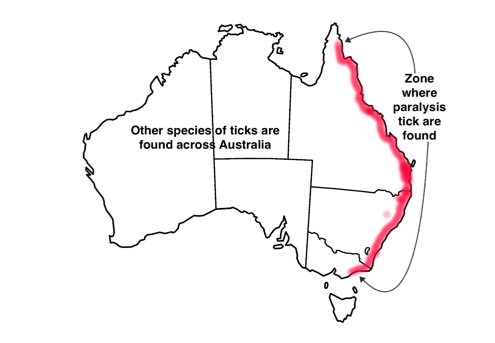 In Australia there are more than 70 species of ticks.  The nastiest is the paralysis tick, Ixodes holocyclus. It inhabits the eastern coast of Australia and a band 20 or 30 km inland, from around Cape Conran in Victoria in the south to Cooktown in Queensland in the north.  Some places (such as the northern beaches of Sydney) are notorious hotspots for Ixodes holocyclus. The distribution is changing and occurrence of Ixodes holocyclus has been reported from central Victoria and Melbourne suburbs.

What happens when a tick bites?

It anchors itself with its very long “hypostome” (a feeding tube that is covered in hooks).

Sucks in blood and squirts out toxins and germs. The longer it’s alive, the more toxic load it spits out.

What happens when a tick bites? (more information)

Adult ticks are masters of stealth. They crawl up without alerting its host and find a spot (hairline is common) where they may go unnoticed. The bite starts with a little squirt of anaesthetic – so the host doesn’t feel the stab of the backward barbed jaws sawing into through skin.  Australian paralysis ticks have extremely long jaws which pierce through skin of the host and into the blood supply. Some ticks (not the Australian paralysis tick) make a clever secretion of ‘cement’ material. This substance acts like a builders’ plug used to secure a screw into a wall. The cement bonds the tick’s jaws into the host while allowing blood to be sucked out, and, unfortunately for the host, toxins and pathogens from the tick to be squirted in. Once the attachment is secured, the tick can stay undetected as it administers (via its saliva) a cocktail of chemicals that minimise the hosts swelling and itching and prevents blood clotting. As feeding continues the tick starts to swell and the exudate (spit) from the ticks salivary gland into the host increases. The saliva contains lots more than just the ‘stealth’ chemicals. Some of the nastier elements are listed in “why are ticks so toxic”?

Why are ticks so toxic?

Some of the nastier consequences of a tick bite include:

What can you do to avoid ALL THIS?

1. Avoid going into areas where nasty paralysis ticks live. Sadly, the Australian paralysis ticks (Ixodes holocyclus) love the humid warm conditions that occur all along the east coast and a bit inland.  Most Australians live, work and play in this zone. 2. Do all you can to prevent ticks getting onto your skin

if you get a tick bite

Every one of these will disturb the tick and can encourage it to spit its horrible load into you or your child or pet.

What do you do?

Get and apply Tick Tox®. Freeze your ticks off! Tick Tox ® snap freezes (and kills) ticks on humans and animals. A short burst of Tick Tox ® immediately kills ticks on humans and animals. There is NO disturbance to the nasty pest. It  has no time to inject you with any more of its toxic load. It takes a few minutes for the (dead) tick to loosen its grip, as it has an impressive set of fish hooks on its jaws  to prevent you from dislodging it. After a few minutes, you can brush the dead tick off and apply a dab of antiseptic to the bite site. Some dead ticks don’t let go easily – so spray some antiseptic onto the bite site and  be patient.

MYTH: A ring around a tick bite is your body fighting the poison and is nothing to worry about.
TRUTH: NO!  It is your body screaming for help.  If you see a “eschar” where a tick bit you, go to a doctor. DO NOT DELAY! Tell your doctor that you have suffered a tick bite. Click here to see image.
MYTH: Ticks drop onto you from high up
TRUTH: No they don’t: They do grab onto you from low vegetation, then crawl up. Always up!
MYTH: The head needs to come out
TRUTH: Actually they don’t have a “head” – but it is important to get all of a tick out.
MYTH: Ticks can be suffocated with lanoline or Vaseline
TRUTH: Not a good idea. They hardly ever “breathe”.  It takes a very long time to kill a tick this way. The longer you leave a tick the more likely it is to transmit diseases or allergenic proteins to you. Killing ticks quickly will limit how much of toxic load they’ll spit into you.
MYTH: If left a tick will lay eggs inside you
TRUTH: Rubbish.  Adult female ticks lay eggs (about 3000) among leaf litter. Never inside animals.  But it is really important to quickly and efficiently kill a tick.
MYTH: If you don’t get the head out it will grow another body
TRUTH: Rubbish. They are nasty, but not hydras.

STILL HAVE A FEW QUESTIONS?

Get in touch, we’d love to help.